Gram Parsons Still Dead Part I: If he could only see himself now 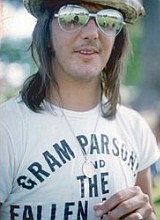 For those uninitiated, Gram Parsons is given credit for being the godfather of Country Rock music, although he preferred to call his style Cosmic American Music, a melting pot of rock, R & B, and Country. Ever heard of Uncle Tupelo? Wilco?

Gram was a privileged, wealthy, and very damaged son of the south who formed one of the first Country Rock bands, the International Submarine Band, while at Harvard (no dummy, that boy!), then went on to pretty much hijack the Byrds for one album, Sweetheart Of The Rodeo

, and then did what he seems to have became most famous for...he went out to The Joshua Tree Inn in the desert and died! Now, the truth is old Gram may not have even been famous for that if it weren't for the fact his road manager, Phil Kaufman, stole his corpse and took it back out to Joshua Tree and torched it!

First of all.....sorry, Gram. I promise we'll write more about the music in the future and less about that ugly little episode that happened at the occasion of your demise.

I think it was Roger McGuinn who said it, but it could have been any musician who knew Gram Parsons. "Gram sure would have dug it knowing he was gonna be this hot after he died." Most everyone who knew Gram agrees on the fact that while music was the vehicle and Gram wanted to play, what he really wanted was to be famous.....um, mission accomplished! OK, well there was that early departure thing... maybe that wasn't the best idea!

Gram would have dug it? No kidding!! Based on what I've read about the man, and that's pretty much everything, he would have loved the entire way he achieved fame.

"If Gram was here today, he'd still be dead..... he was heading in that direction".. Phil Kaufman in Fallen Angel

Gram would have loved the whole story about the coffin burning, he would have dug that stupid movie, Grand Theft Parsons

. He probably would have agreed to make a cameo appearance as his own corpse. Gram, by all accounts, loved telling stories, so I have to think he would have totally bought into Phil Kaufman creating his own myth in that flick. Who cares about the facts? Apparently Gram, who was known by all to tell whoppers pretty regularly, sure didn't. One if the funniest parts of the entire myth for me rests on the fact that Gram fans have for years placed wreaths and tributes at a certain spot next to Cap Rock, where the "cremation" of Gram Parsons was assumed to have taken place. Kaufman, ever the realist...and some would call him a few other names, featured a map in his book, Road Mangler Deluxe

, and asserts that there is no way that he and his partner in the body stealing venture, Michael Martin, could have drug a coffin full of Gram Parsons to that particular spot as they were simply too drunk. Instead, he circles a much less romantic area that is right by the road, allowing the drunken duo to simply drag the coffin out of the hearse, dose the body, and easily get away from the headlights approaching in the dark. Kaufman recounts that the coffin seemed quite heavy in their inebriated state and at one point they actually dropped it and both said "Sorry Gram".Of course, there is the question of how someone too drunk to remember much of anything comes up with so many small details that just happen to be so "screen worthy", but when you are creating your own myth......

There's another thing you have to realize before becoming absorbed in the story of Gram Parsons, which is easy enough to do. Tennessee Williams could not have written the story in his wildest dreams. Alcoholism, Drug Abuse, Wealth, Death. All the elements are there for a Southern Gothic Epic. But we go to deeply into it, I should tell you this one thing you have to realize about Gram Parsons.

No romance, no glory, flat out, for the last year or two of his brief life, Gram Parsons turned into a junkie! His death was, as becomes increasingly clear as the years go by, a junkie's death. A mistake. A miscalculation if you will. If Gram was here, he might still be dead, but he'd be saying "never, ever, ever take a second hit!"


Coming up in Part II: We hear some words from Emmylou Harris and Chris Hillman and try figure out exactly who was there and what might have happened the night Gram checked out!