LOVE TRAIN, the O'Jays classic that Daryl Hall, John Oates, and Todd Rundgren are belting out for the grand finale of the final show at the Philadelphia Spectrum on October 23, 2009, might have been the latest song that this trio sang together, but their musical history together extends back another almost 4 decades.

By the end of 1973, I had discovered Hall and Oates, reveling in the combination of blue eyed soul and folk like instrumentation and harmonies that comprised the sound of Abandoned Luncheonette

.Todd had been at the fore front of my emerging musical consciousness beginning with the tuneful era of Runt

,through the span of Something / Anything

,extending into the whimsical tunefulness of A Wizard, A True Star

,and past to the electronic experimentation of Todd

When it came to Todd, I was almost as much into Todd the producer as much as Todd the musician. Total fascination with guys who can hear a sound in there head, twiddle a knob on a board, and there you have it. 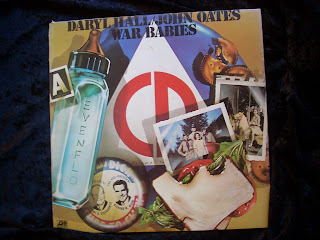 Thus it was in late November of 1974 when the third Hall and Oates Album, War Babies

,appeared on the new release shelf at my local record shop, Back Alley Disc, thus named as it was actually in a back alley....one that I took a short cut through every day as I walked home from class at UVA. The album cover, a montage of images including Ritz crackers, Bomb Shelter signs, an Eisenhower-Nixon campaign button, and a half-eaten BLT sandwich, did little to give away the audio treats hidden inside the package, instead creating an aura of nostalgia akin to the dilapidated and overgrown diner on the cover of Abandoned Luncheonette.Upon turning the cover over, I saw the first indication that perhaps War Babies might be a little different from Luncheonette. 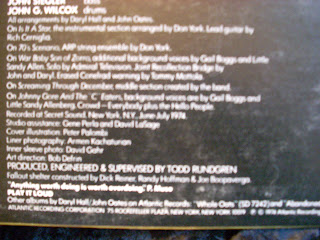 PRODUCED, ENGINEERED, AND SUPERVISED BY TODD RUNDGREN
Further enunciating Rundgren's influence was the admonition to PLAY IT LOUD! Topping it off was one of the Rundgren mantras "Anything worth doing is worth overdoing" attributed to one P. Muse on the back!

Nice!! What an anticipatory walk home that was! A duo that I had just gotten into primarily because of their stellar vocals and blue eyed soul leanings produced by the man I not only considered one of the premier record producers of the era, but also one to whom pop and blue eyed soul came so easily that he had already left much of it behind before the public even heard it. Match made in heaven? The walk home to my little detached speaker record player was filled with thoughts of a virtual blue eyed soul extravaganza as well the effects from the marijuana that I had packed into top half inch of the Merit Light cigarette I smoked as I walked home. 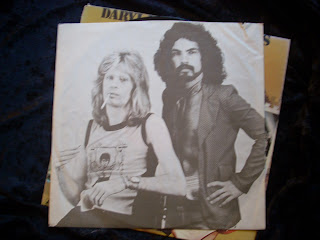 Upon arrival, I performed the ritual of tearing the plastic from the cover and pulled out the sleeve to reveal a much different looking Daryl Hall and John Oates than the back cover of Luncheonette. Gone were the denim jackets and any semblance of a folky look. A fairly androgynous looking Daryl Hall in a tight, sleeveless t-shirt shook the match that had just lit the cigarette hanging from his mouth and Oates stared shirtless except for a patterned and shiny designer jacket.

As the needle dropped on song one, Oates' "Can't Stop The Music (He Played It Much Too Long)", a reflection on the rigors of touring, it was the sound that caught me right away! The mandolin and acoustic guitars of the first two H & O albums were totally gone, replaced by electric guitars, keyboards, and the sound of Rundgren's signature and never ending synthesizer washes floating around in the background! I LOVED it!!

As if to accentuate the point, the song segues gracefully into "Is It A Star" and the wash of Rundgrenesque electronics intensifies as the songwriting begins to take a slightly more experimental turn, all the while thematically and lyrically remaining consistent with the general negativity of the duo's experiences in the music business while set in the strangeness and isolation of a post-60s cityscape.

"Beanie G and The Rose Tattoo" and "You're Much Too Soon" are more conventional in melody for the most part, while "70's Scenario" anticipates and sets the mood of isolation and coldness that will dominate much of side 2, with tons of reverb, more moody synth wash backgrounds and Rundgren's counter to melody and out of time guitar solo. Much was made by some critics of what they described as Todd's regressive playing on this and other records of the era. It's clear to my ear that the guitar injections are intended to jar the listener, not sooth them.

As side 1 ends, it is noted that the cityscape that the album closely resembles is more New York than Philadelphia, understandable in light of the musicians current residence in NYC. With solo writing credit for 3 of 5 songs on side 1 and 4 of 5 on side 2, also noted is the dominance of Hall's songwriting, likely a factor that played into his recent assertion that War Babies was sort of his first solo album (an assertion that Oates strongly disagrees with, by the way). 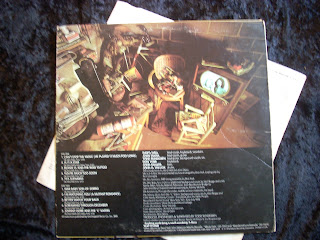 Side 2 (remember the sides?) is where War Babies really gets ramped up! The title track is the centerpiece of the LP, beginning with an air raid siren straight out of the 50s air raid shelter days pictured on the cover.The almost military beat of the music kicks in and builds until it's a melody almost reminiscent of Rundgren's "International Feel" from A Wizard, A True Star. The lyrics of "War Babies" are a liturgy of images drawn from the culture of the 50s mixed with the apprehension familiar to any child who grew up in the era when a plane flew overhead in the dark. All the paranoia and fear that was growing up in the post nuclear world is there, accentuated by the band's stellar musicianship.

If "War Babies" is the thematic core of the album, it is the next song, "I'm Watching You (A Mutant Romance)" that represents its spiritual core, empty as that may be. It is prefaced on the lyric sheet by a note:

Starting with a solo piano riff backed by the synthesizer whirl that was a signature of Rundgren's sound at the time,the lyrics appear to be a paean of love to a prostitute from the watcher of the monitor screen until the very last verse when the watcher is revealed to be the video camera itself, thus the mutant romance. What better image to illustrate the coldness and isolation of the city and, for that matter, the music business of the mid-70s itself than the image of the machine, devoid of real feelings yet watching all the time?

The fadeout of the song with it's plaintive "and I'm watching you... all night!" still sends a slight chill down my spine. After all this dripping depression, some relief is called for. It appears in the form of the very next track "Better Watch Your Back". A jaunty and happy guitar riff with a hint of Hall's mandolin in it carries the energy immediately from the head to the feet, the butt, or whichever body part gets dancing fever first. Not all old school, the track features a bass line and slide guitar part that places it squarely in the War Babies sound base, nonetheless the shear upbeat melody of it offers relief from the city sounds that proceed it, despite lyrics which decry the danger of outspokenness of thought. 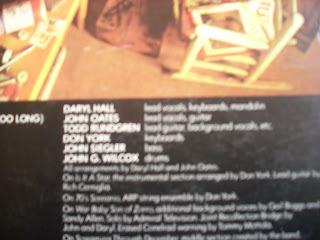 The mood is optimism is immediately broken by Hall's dirge like piano and lyrics to "Screaming Through December", but 3 minutes in the song turns into a virtual Utopia jam. Utopia was Rundgren's fledgling group at the time and War Babies included the full Utopian rhythm section of John Seigler on bass and Willie Wilcox on drums as well as Todd on guitar. The spacey instrumental section goes on for almost 2 minutes before winding back into the melody to close the track on the downbeat it started from.

War Babies spent an awful lot of time spinning around on my little record player for a good 6 months or so. As far as I was concerned, it was as much a Todd Rundgren album as a Hall and Oates album. As I alluded to previously, I was as much a fan of Todd the Producer as Todd the Artist. War Babies was a true collaboration.

Rundgren touches were everywhere, from electronic segue between the first and the second song to the low volume keyboard doodle which starts "Beanie G and The Rose Tattoo". That was enough to keep it on my turntable for quite a while.

RCA signed Daryl and John and for years they distanced themselves from War Babies, colluding instead with the Atlantic records version of the story that the all powerful Todd Rundgren came aboard and virtually forced the duo to make an noncommercial record.

Meanwhile, Hall and Oates released their first album for RCA, commonly known as the silver album. The work featured their venerable classic "Sara Smile" as well as the upbeat and declaratory opener "Camellia". Gone were the synth washes and metallic guitar, replaced by soothing keyboards and smooth guitar as Daryl and John took their proper place amongst the Yacht Rock artists the era is known for today.

When I first saw Daryl and John live in 1975, the silver album aka Hall & Oates, was their latest album and "Sara Smile" was the current hit. I don't recall them doing ANY songs from War Babies that night.Here they are performing "Is It A Star" for a German TV show in 1976. Check the duds that everyone is wearing, the palms trees on the set,and the generally softer arrangement of the tune..... ah,Yacht Rock! This video is from a bunch of cool You Tube stuff collected by Eddie Zyne, the drummer of the group here!

War Babies went into the bargain bins until just this last October when Paul Myers excellent book,A Wizard, A True Star: Todd Rundgren in the Studio

,was published. That book was not only the inspiration and reference guide for this article, but the sole impetus behind my finally getting a CD version of War Babies.

A move fraught with irony and hypocrisy actually began the reassessment of War Babies' delights when Atlantic Records, who threw Daryl and John off their label in 1974 because of it, re-released War Babies in 1998 as part of the label's 50th anniversary celebration.

Apparently, Daryl and John have reassessed it as well. In fact, a brief discussion of the album ensued when Todd made an appearance on Hall's online TV show Live From Daryl's House, last year.The show also includes a mainly acoustic version of "Better Watch Your Back" from War Babies.

War Babies is from the collectors label,Wounded Bird Records,and is available through Amazon. Highly recommended!!
Listen to internet radio with Rundgren Radi
Posted by Rick Haggard at 8:14 PM